NIQ is not normal.  NIQ is not mainstream.  If you don't like surprises, you should probably leave now...
Since taking human form, he has chased the magic and dodged the mundane.

He fits in some boxes, but only for amusement... Perhaps a cosmic box, or a fusion box... or a "cosmic-fusion" box... yep that sounds good.

An experimentalist, since the beginning... NIQ lives by the mantra:
"I'll try almost anything at least once" and
"I'm ok with missing out on what everyone else has and having what no-one else does"

Blame his alternative nature on his upbringing if you like... Home-schooled with 5 siblings and spoon-fed classical radio by a hippie piano-teaching matriarch, he found his calling when encountering the local trumpeter perform at church. "There's my God" he thought.  (See "Horn of Fate" - the autobiographical tune in his first album, relating to this story).

Following a kaleidoscopic childhood, Niq studied in a real castle (actually!) and after hearing James Brown, had the demon-inside awakened by jazz-fusion, funk and programattic music, eventually travelling to Sweden to study with renowned pedagogue Bo Nillsohn.

After a sabbatical - infiltrating homes with wine-tastings, he returned with a Frank Zappa-fire, storming the east coast with mad costumes & ear worms and joined the tribal Sydney band “Rhythm Hunters”.

One fateful day, his keyboard transmuted into a digital accordion and Vangelis synths became a new love-child of his musical amusements.  The NIQODEMUS project started to take form!

Increasingly Electronic but still true to the fable-character of folk, he performs alongside theatrical bands like 8-foot-felix, Ungus ungus ungus & Hello Tut Tut in Festivals across Australia.

"Niq Reefman... is human weed. Can you smoke Frank Zappa if he came back from to the dead to join the surviving members of Monty Python?"
- Tattoo.com

"A master class in performance art.  Had all the wonderful ingredients: natural, warm, honest, edgy, mysterious, surprising, musically lush and dazzling, with excellent use of dynamics and space.  Humour! The courage to live comfortably on the edge of RIGHT NOW. Rare is the artist today, who is bold enough to truly fly on the wings of the living moment."
- Sound Feast

"Whimsical vibes.  I feel like i'm on a journey ... i love stories and that's essentially what music is… poetic expression through melody."
- Fan

His self-released album “A selection of musical tales” is developing a cult following and contains elements of storytelling, jazz, folk and electronic music.

"Lots of humor mixed with dainty, delightful melodies.... This is true musical genius, the type that demands discipline, hard work and an innate flair."
- Huffington Post

An old soul trapped in a bag of bones, most of his works explore a narrative of the ridiculous or natural world.  His live show exemplifies this in a gripping and lyrical concoction of musical comedy and jazz fusions.

​Perhaps it is Niq’s Dutch ancestry that led to his roving nature, sailing the ocean of possibility with every instrument and idea he gets his hands on. 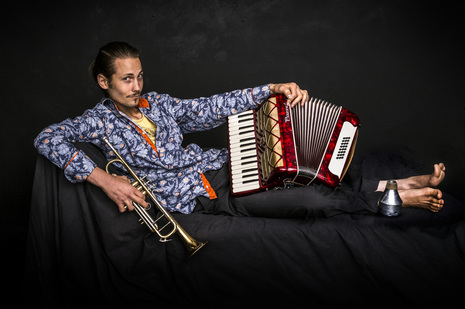 Influences in a timeline (most recent first)
People often ask where Niq got his trumpet-style. Much inspiration was taken from emulating sounds and style from OTHER instruments, and incorporating them into the trumpet, but here is the rest of the story (well some of it)
2016+ Niq starts playing with kickin Melbourne Balkan brass band “Opa Bato”
2015 - Inside a shrove of banana trees in QLD, Niq learns the arts of electronic music and school shows with Guru Tjupurru (international didjeribone performer and entrepreneur)
2013-2015, Niq can’t take the withdrawal symptoms anymore after encountering the Rhythm Hunters, and joins the band while building a vision for his own music
2011-2013, Quits music altogether (so he thinks), and becomes a wine salesman, hosting Tupperware parties but with wine. Much better!!
2009-2011, Travels to Sweden for intensive studies with internationally renowned teacher and psychologist Bo Nilssohn.  He discovers the lost city of Nimis in the Kullaberg wilderness, couch-surfs with whisky/cheese connoisseurs and visits a friend in Norway who broke her leg in the army.
2005-2009, Niq loses himself in the catacombs of Sydney Conservatorium for a Bmus Performance.
2004-2005, Niq has a fling with Australian Institute of Music in pop and composition
Teens+, Niq Studies with trumpeter and opera singer Brian Evans who to his teen-related dismay makes him sing
Childhood+ Niq hears Matthew Dempsey play at the local church and decides he knows what heaven sounds like.  He commences lessons.
​